"Satan is assaulting our lives with the abomination of filthy and vile gay marriage." As a gay guy living in Ontario who had just married his partner of 21 years, on a recent trip to Washington, DC, this was an unnerving TV message to start the day with. Was this typical of Washington? Was I surrounded by fanatics, protected only by the goodwill of the Holiday Inn desk clerk? I grew up in Texas, familiar enough with fundamentalists, but the tone here was much angrier than I recalled from my childhood. Were Dennis and I really that much of a threat? - a professor and a civil servant, in the suburbs of Toronto, with two dogs and two cats?

Al Chambers' invitation to write a short piece for the class web site spurred me to get my thoughts on the subject more in order and to present a view of how the issue of same-sex marriage looks to someone from the inside. No one is really typical, no one sees all the implications, few of us are clear-slighted or wise, but this is my view.

My own personal history is fairly simple: I was married towards the end of graduate school. My wife and I moved to Toronto and had two boys. After eleven years, we separated. I had never had another partner except her, and for a couple of years I lived a quiet monastic life. A personal religious experience gave me the courage to come out. A few years later, friends (who were still around to be our witnesses at the wedding) introduced Dennis and me; we clicked and never looked back.

I see the issues around same-sex marriage as both legal and social. I am not a lawyer, but I have been following the issues for the past few years. At the present time, marriage is legal here in Canada only in two provinces; it should become legal in Massachusetts in May, and a number of marriage licences have been issued in California, with uncertain legality.

In Western society, two competing legal principles are generally at play. The traditional definition of marriage is universally straight. At the same time, the western world has in some way generally adopted a principle of not arbitrarily discriminating between groups of citizens. The typical prohibited grounds of discrimination are matters like age, gender, religion, national origin, ethnicity, and race. What is novel now is the addition of sexual orientation to this list. To me, this is so obviously correct and necessary that no argument is needed. Basing laws on whether a person is straight or gay is as logical as having different laws based on eye color. The fourteenth amendment in the US constitution limits the unreasonable abridgement of rights and privileges of citizens. Comparable restraints on government exist elsewhere. In principle, equal treatment should trump discrimination, but often it hasn't. 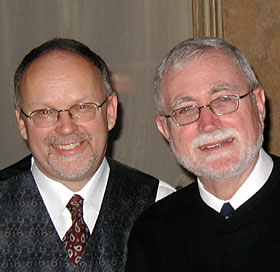 Until the late twentieth century, society simply ignored the application of the law to sexual orientation, allowing shocking injustices to occur. Recently, an increasing number of cases have been heard with the courts tending to reject discrimination based on sexual orientation. Society copes fairly calmly if the issue is about pension plan benefits, but marriage is symbolic, an untouchable bastion for the conservatives and the next (possibly the last) step for gays and lesbians.

In looking at recent cases in Canada, I found the arguments against same-sex marriage to be astoundingly weak. A lawyer argues that same-sex marriage would undermine society. The judge says, "Well, perhaps you could help us and expand on that a bit with a concrete example of how this might happen." The answers are appallingly thin. One Government lawyer in Canada actually argued that marriage is straight because it just is. I began to wonder if she was "throwing" the case, but I think she was just making the best argument she could. The other side argues that limiting marriage to people of different sexes is discriminatory, and that a two-tiered system with "marriage" for straight people and another term for gay and lesbian people is unacceptable as "separate, but equal." Judges are trained, naturally enough, to look at legal issues. These arguments make legal sense to them, and the result is predictable: the court rules against discrimination, and conservatives are outraged.

President Bush is pushing for a constitutional amendment limiting marriage to people of different sexes (this wording seems more fun than "opposite"). The apparent reason for this is that conservatives don't trust the courts, and possibly the legislatures, to maintain the traditional definition. They feel that an amendment is necessary to keep the legal system from working in its normal manner. Aside from thinking that the substance of this proposed amendment is wrong, I also agree with Americans who believe that Bush is using the constitution as a political football to win the next election.

The social aspects of the discussion are more varied. "Sanctity of marriage" has traditionally been the term for opposing divorce, not marriage. The term has now been twisted to a very different meaning. Those who want to attack divorce would be more honest to argue straightforwardly for eliminating the legal possibility of divorce.

Gay or lesbian marriages are said to damage the community. Dennis and I have lived in our present house for eight years. The argument seems to be that our new status of being married will cause serious moral decay in the neighborhood, a problem which would not have happened had we not married but continued "to live in sin." The logic of this escapes me

Clearly, marriage is traditionally straight. For some people, same-sex marriage is a complete abandonment of traditional values. My earliest years were in Texas where segregation was traditional. Washroom doors at the bus station were labelled: "ladies, gentlemen, women, men." I remember my father correcting me when I entered the one labelled "men." I remember my mother telling me that black people sat at the back of the bus. Sometimes tradition is good, and sometimes altering tradition is better. Life changes, but there is little correlation between the wisdom and the popularity of a change.

Fortunately, I have not suffered a great deal of personal discrimination in my life, possibly because I have learned to run from trouble. But I am tired of being expected to sit at the back of the bus. I don't pretend to have the courage of Rosa Parks who kept her seat at the front, but Dennis and I are not prepared to be told that our love and commitment is second-rate and that we are not worthy of marriage.

Religion adds considerable intensity, but little light to the discussion. We are ourselves members of the local Anglican (= US Episcopalian) parish. The newspapers might lead someone to believe that Anglicans are frothing at the mouth (genteelly, of course) over gay marriage. Our own experience is at odds with this, even in a suburban parish, disproportionately old and white. Dennis is a sidesman and gives out communion; I organize readers and chair the parish council. Despite our enthusiastic priest, the Anglican Church is not yet willing to marry same-sex couples. So, we had a service at our house for our rings to be blessed. We sent out invitations to friends at church, not sure if anyone but the rector and his wife would come. Everybody accepted.

I had always taken some pride in our having built a relationship in the absence of social support. Is marriage just a piece of paper that says we're legal? No it's more, much more. We feel different, better, closer, more a part of society. We have celebrated many anniversaries which recognize our history, but marriage recognizes our relationship itself.

The wedding itself was a pleasant affair with friends. We had a United Church minister, and I baked the cake. With traditions somewhat askew, we both wore old new, borrowed, and blue, but didn't throw a bouquet.

All, however, is not hunky-dory and marital bliss. A family member exploded at us at Christmas, and I have lost the friendship of someone I really liked at work. Most people, however, have been wonderful. My own boys and my former wife have been great. Time is clearly on our side. Every poll shows that younger people are less discriminatory than older ones. A retired friend, wishing us well as she left our ring blessing, said, "Being invited here has really bumped me up in my daughter's estimation."

Classmates are welcome to email Hank on the subject at rogers@chass.utoronto.ca, or you can express your point of view on our web site's Message Board.