When I crossed the threshold of Bingham Hall some 45 years ago and contemplated what I might want to major in at Yale or what I might do after I graduated, the thought of managing real estate never entered my mind. In fact it didn't enter my mind until after I had been with Procter and Gamble for some 20 years, when a close friend of mine suggested I run a small property management company that managed tax-sheltered real estate.

I was 46 years old at the time and exhibiting symptoms of going through a mid-life crisis. I didn't spend much time analyzing my choices — I just jumped ship! Why not switch careers from sales to property management? I was good at managing people, and that was the main criterion, my friend said, for the job he was offering me as President of a property management company managing 20 apartment properties in eight states.

In 1986 the company began managing community associations in addition to apartment buildings. We started with a 12-unit condominium association in Princeton, New Jersey. Over the next 15 years the managed portfolio grew to more than 12,000 units in 50 associations. The core group of five good people grew to 35 good people, and I had a thriving property management business.

But then my gray hair started to turn white, and people started asking me: "What's your exit strategy?" Something about white hair seemed to trigger the question! I didn't feel old. I didn't think I looked old. But white hair seemed to suggest "old," and that meant you better start thinking about getting out of the business. I really hadn't thought about "exit strategy," not when I was still busily building the business. I took pride in seeing people grow and develop and gain confidence in what they were doing. I enjoyed seeing the business be successful.

I had a professional firm assess the value of the company and found it wasn't worth what I thought it was worth. Word got out in the trade that maybe Murray was thinking of selling out, and offers started to pour in. Competitors were like vultures. I was actually enjoying the sell-or-don't-sell shuffle, despite the professional firm's lowered appraisal. I poured over my own numbers, stripping out all the extra perks inherent in a privately held small company, whittling the bottom line down to what the company was "really" worth. After all, it was a cash flow business, no hard assets, lots of goodwill and short term Contracts.

After two years of dancing the shuffle and enjoying countless lunches and secret meetings with would-be buyers, I still didn't know if I really wanted to sell out. The company was at a critical mass. It was still a small to medium-size company primarily in the Community Association management field. It was a nice niche. But business had slowed down a bit; there was a lot of people churn. Management contracts were starting to turn over more frequently, and new business was harder to get. I was working 60-hour weeks and not getting the satisfaction that I had experienced in the past. I started to have major mood swings. My wife would tell me later that I would be on a high one day and on a real low the next day. I wasn't fun to be around.

Then came 9/11. I was sitting in my office with one of my clients when the first plane hit the first tower. As the reality of that fateful day and the aftermath hit me, I began to wonder what am I really doing all this for? Suddenly, retirement wasn't just something I was supposed to do, it was something I actually wanted to do. But I really hated that word "retirement." The connotation was that there was nothing left. It was the end. Life was over.

I went to our 40th reunion with the express purpose of finding out what our classmates were doing. How many have retired, who was thinking of retiring. I needed some reaffirmation that what I was contemplating — my exit strategy — was a good thing. I didn't find the answer, but I did talk to a lot of classmates who were into another phase of their life. They hadn't "retired." They were simply moving on and doing something else. Marshall Hamilton had left his successful law practice and gone back to school to study environmental sciences. Now he has applied his lawyer skills to helping environmental causes. John Peck was busy "puttering" around the house and never had a dull day walking the beach and just taking life easy. I began to see that retirement could open up a lot of opportunities. It could be an exciting time. 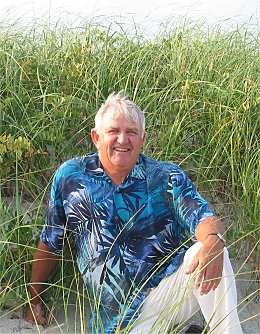 So a year later I finally sold my company to two of my employees. After contemplating two offers from outside buyers, I realized that I had developed a unique little company with a culture of its own. We were a family that had grown together and persevered in a very competitive business. If I sold out to one of my competitors, I would really be just selling off my contracts. Certain employees would lose their jobs, and the company that I had developed would disappear in the consolidation bin. I now have the satisfaction of watching two of my former employees add new life to the company. The company is growing again, and I am moving on to a new phase of my life.

I'm taking life easy and looking around at various opportunities. I figure I have plenty of time to make up my mind exactly what I want to do during the next phase. First up on the agenda is to get my body in shape so I can do all the activities I've been too busy to participate in for the last 10 years. So far I've lost 15 pounds over the last year and joined two athletic clubs. And, believe it or not, I'm actually going to the gym on a regular basis and working out. Tennis everyday during the summer has become a ritual. Best of all, I took up competitive sailing again after a forty year hiatus! Sailing on Wednesdays and Sunday afternoons was just not possible during my 60-hour workweeks. Now I'm looking forward to those Wednesday and Sunday races. Of course, winning helps!

I've taken a page out of Marshall Hamilton's book and am dabbling in going "back to school." So far I've taken a field naturalist course with the Group for the South Fork in Long Island, and am currently auditing a course at Princeton University on American foreign policy. My wife, Meredith, and I are renovating our bay-front house in Westhampton, Long Island and will move to Long Island year-round this summer. I've applied for a volunteer job with the Town of Southampton, renewed friendships with childhood buddies, checked out the course offerings of the local colleges, bought a new set of golf clubs, oiled my fishing tackle and look forward to becoming an active part of a small village community. I hope to apply some of my newfound environmental interests and skills to saving some of what's left of the beauty of Eastern Long Island. I think I'm going to like this phase of my life!