I find Mauritius a wonderful country. There are just over a million people of origin in Europe, Africa, India and China, on an island with one big city (Port Louis), the rest in agriculture (sugar cane) with many villages and a few big towns in the highlands. The coast is dense with hotels all the way around the island, and the beaches are glorious. I swim at Mon Choisy, a public beach about two miles long, beside the lagoon, with a view of distant mountains. It is sublime! The coast is hotter here than Florida, but not so damp. It's a bit like central Mexico where people take to the mountains in summer to escape the heat. The towns in the mountains here are often as much as 10 degrees F. cooler. But it is still paradise even when it is hot, for it was on the first really hot days that our banana and mango trees gave fruit. I remember in Carolina when folks would say, "It's too hot!" I would say, "but the tomatoes, and the corn, and the peaches, and the melons!" 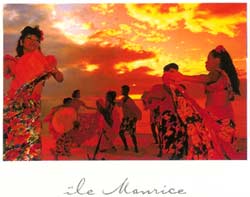 As to money, for the rest of my life (or that of the federal government and the state of North Carolina) I have monthly pensions of $1,200, which goes indeed a long way here, where I rent a big house for $235 and pay a full-time housekeeper/cook $150/month. I drink local rum (Gray's Deluxe at $3.25 a bottle) and French wine (Baron d'Arignac, rouge, at $4). Public hospital medicine here is free to the public, including foreigners, while visits to a private doctor are $6 and up. A night on the town costs me $14 for round-trip taxi, $3 entrance to a disco, and cold beer at $2 a bottle, or slightly more than $20. I can do it all on a Carolina government pension and Social Security! Mauritius really is the exotic place I imagined it would be, and I am learning much about the Muslims, the Hindoos, the Tamoul, etc. As well, I am learning languages. L'importante, of course, is French, but I must also master Kreol (a patois of French) and in time (it will take much time) it would be useful to know Hindi and Bhojpuri. Of course English is the official language of the country, and nominally all government school classes are conducted in English. But this is a joke. Very few actually learn much of it, and less than 1% of the people speak English at home.

Mauritius has a flourishing textile manufacturing sector, and high quality clothing is made here for several 'designer' brands, including Hugo Boss, Versace, and most conspicuously Ralph Lauren, who is not only a major exporter but has captured the taste of the entire population for his retail business. Everyone wears Ralph Lauren clothing here, and it is sold everywhere. Lauren is very easy-going on the locals in the matter of franchise rights, and with literally hundreds of 'authorized factory outlets' competing with one another all over the island, most of them 'pirates', RL's 'polo' clothing is highly affordable here.

You ask why I came all the way here to put down. In a direct way it was AIDS that put me on the road again after my food friend, eternal soul-mate and former lover Les died in 1999. His presence in a nearby town had been a great comfort, as we visited back and forth a great deal and I often spent the holidays with him, his lover John, and his family in Elon College. During Les's long illness two of our closest 'friends' had dropped both Les and me, cold, on account of intolerant attitudes about AIDS, giving me to feel a certain chill towards Chapel Hill.

I first heard of Mauritius in 1975 when I was living in Long Beach, CA., working as curator at the little art museum there (L. B. Museum of Art), in Ocean Boulevard, the former home of 'Fatty' Arbuckle. It is a sweet place to drop in on, if you ever visit Long Beach. I included a local artist, Lenore Stribley, in a little exhibition I put up there, and in consequence Lenore sold some pictures and had a little "success". To thank me she gave me a little curiosity she had picked up, an old seaman's map of Mauritius, published in London in 1850, in a roll-up mounting - very elegant old 'clutter' to decorate a wall with. . . I was truly flotsam in those days, but when I again had a stable mailing address, I subscribed to two Mauritian newspapers. I regularly consulted the library wherever I was living and read any books there might be on Mauritius. I grew increasingly certain that one day I would actually see this exotic place. In the event, when I retired in 2001, I was completely at loose ends and it was but small inconvenience to drop everything and head out. I had been writing a little 'book' on Chapel Hill, but it was about done, and several of my best friends had lately died or dropped out of my life. If I sold my house and my car, I would have abundance of cash to effect the change, and there are two solid pensions for support over the long haul. It was all just so easy that I did it. I came here in April 2002 to try it out for a year. 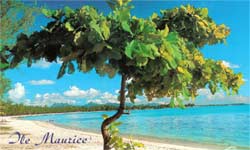 I applied [in May 2002] to Immigration here for a year's visa to study the Creole language, but they turned me down. No reasons were given, not even when I went to Sterling House to ask, so there was no basis upon which to reapply. The project I proposed to Immigration was quickly to learn the Creole language - for it is an easy language, with all the complication of the parent French ironed out. Then I proposed to collect 'artistic' writings in Mauritian Creole, with a view toward eventually publishing an anthology of songs, poems, stories, sayings, cartoons, and the like. There is little to choose from that is already published but there is every kind of thing out there among the 'inédit'. To be sure, the wealth of unpublished/uncollected material in Mauritian Kreol, particularly songs, is sufficient to fill out a fairly impressive volume. It is my quixotic hope that such a book could eventually be considered for use as a text book in the Mauritian schools. But they - at Immigration, and the government in general - are scoffers and see little value in the Créole. "Who will publish this?" they demanded to know at Immigration.