I had a most extraordinary experience when I traveled recently to Taiwan with my wife, Judith Thomas. I learned of her courage in an earlier part of her life and was introduced in one fascinating week to a portion of the drama and excitement of recent Chinese history and culture.

Judith and I traveled to Taiwan, along with Judith's three adult children and their father [Judith's ex-husband] Milo Thornberry. We went as guests of the Taiwan Foundation for Democracy, a private organization funded by the Taiwan government. The TFD hosted a weeklong program honoring "Foreigners Who Made a Difference in the Democratization of Taiwan." I went along to carry the luggage and be helpful, and ended up with a new view of my wife of twenty-two years. 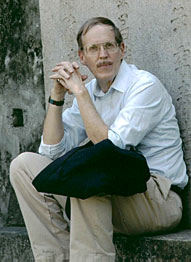 The trip came at an especially interesting time: the simultaneous beginning of the run-up to the Taiwan Presidential election in March 2004; the dust-up over the proposed referendums for that election accompanied by another round of military threats to Taiwan from Beijing; plus the visit of Chinese Premier Wen Jiabao to Washington seeking the U.S. government's support for the mainland's continuing effort to assert its sovereignty over the island of Taiwan.

Let me begin the story with excerpts from a letter that Judith wrote to our friends shortly after our return from Taiwan.

Milo and I spent five years in Taiwan from 1966-1971 as Methodist missionaries. We were assigned to teach at Taiwan Theological College, a school founded by the Presbyterian Church of Taiwan. At that time, the government was ruled by the Kuomintang (KMT) party, headed by Chiang Kai-shek, the general who lost the Chinese Civil War to the Communists in 1949. After the loss, he and his armies retreated to Taiwan, where he continued to claim himself head of all of China. This fiction enabled the government to put off the democratic elections called for by the 1947 Constitution and to maintain a state of martial law for 38 years (1949 to 1987), a period longer than that of any other country post-WWII. That period is now referred to by the Taiwanese as the "White Terror," a time when anyone could be arrested at will by the authorities, tortured, tried in secret, and executed or sentenced to a long jail term. 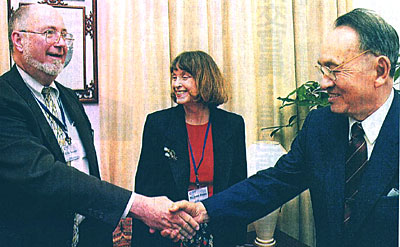 When Milo and I arrived in Taiwan, we already knew something about the oppressive nature of the government. Seeing it up close was another matter. Over time, Milo and I worked with a few other like-minded people on two important projects: (1) We put together a packet of information about Taiwan to give to visiting foreigners who wanted to hear other than the government view of things. We also opened our home for meetings between such foreigners and Taiwanese dissidents who were willing to talk about their views on Taiwan. (2) We set up a project to identify political prisoners and get their names to Amnesty International for follow-up on their cases. We also collected money from various sources, including the American Friends Service Committee, a Quaker Organization. These we distributed to the families of political prisoners, who were typically cut off from any financial aid or legitimate means of making a living.

I was involved in one other rather dramatic activity: Milo and I coordinated the escape of Dr. Peng Ming-min, a prominent legal scholar and professor at the National University, who was arrested as a dissident in 1964 and released after six months because of protests from scholars around the world. We became good friends shortly after our arrival in Taiwan, even though he was still under a form of house arrest that meant he was followed by secret police whenever he went out. After he came under intense pressure from the police in 1969, including threats on his life, we urged him to consider leaving Taiwan and he agreed. There was no hope that the government would allow him to leave legally; the only recourse was some kind of clandestine departure. We had no experience with such an undertaking, but we ultimately were able to come up with a plan to help him leave Taiwan safely. So far as we know, the KMT government knew nothing about this activity until the mid-1990s, when I acknowledged it publicly just before Peng returned to Taiwan for the first time since his escape.

In early March of 1971, we were arrested by the Foreign Affairs Police and deported on order of the KMT-controlled government. The charges against us were not specified; rather, the arresting officers said we were accused of an "unfriendly attitude and actions" toward the government. We were given 48 hours to leave the country, were forbidden contact with anyone other than the mission representatives who needed to arrange for our departure, and had four guards (two men and two women) sitting in our living room the entire time until we left for the airport.

Having to leave Taiwan so abruptly changed the course of my life significantly. Working in China was not an option in 1971, and neither was Hong Kong, whose government was inclined to view me as a troublemaker — this was during the Vietnam War, when HK was struggling with US student dissidents there. My Chinese language ability languished, and I started graduate school at Columbia in a sociology program that focused on other issues. It was as if one pathway ended abruptly, forcing my feet onto a new and very different one. That break was reinforced when Milo and I ended our marriage five years after our deportation.

Then, more than 30 years later, I received the invitation to return to Taiwan with all expenses paid. The TDF invited about 30 persons from the US, Canada, England, Japan, and Holland to return for a weeklong celebration of the same activities that had resulted in many of us being asked to leave or denied reentry to the country. It was an opportunity to come round full circle."

Go to Page Two of this article